Cancer of the Spine 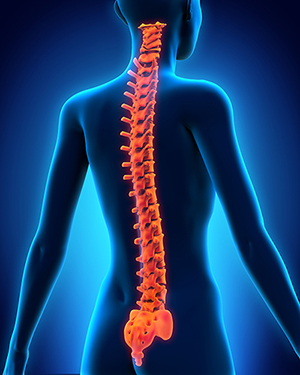 As one can imagine this subject is so broad that complete textbooks have been written on this subject. Undoubtedly, this can be a devastating diagnosis both mentally and physically. In most cases, patients with tumors of the spine are cared for by a team of physicians and medical specialists. Each team member ultimately reports to the treating physician which coordinates the efforts of individual team members. Of note, not all tumors of the spine are “bad” or malignant. There are many forms that are benign or “good” which may not cause any harm and been discovered incidentally. These benign tumors may be present for life and not cause any dysfunction or harm.

A cancer is simply over production of abnormal cellular elements without control or limits which can destroy function of normal organs and other cellular elements in our bodies. Our immune system is able to fight small amounts of such cells on daily basis. However, when our immune system is overwhelmed with cancerous cells, a tumor develops leading to what we commonly refer to as cancer. There are several key concepts that are basic to the discussion. These will be mentioned first. Benign tumors are tumors that do not metastasize. Metastasis simply implies that tumor cells can travel to other areas in the body. Their route of transport could be with the blood stream or the lymphatic system. Still not all benign (non-metastatic) tumors are harmless. Some benign tumors may be so aggressive to invade localized tissue and cause harm in such a way to destroy the adjacent organs. However, generally speaking, benign tumors are more favorable than malignant ones. Malignant tumors have propensity for metastasis and are more harmful.

A cancerous tissue does not only affect localized tissue or destroy localized organs. There are many metabolic changes that occur in the bodies of patients suffering from cancer. To understand this imagine a factory of cell production that is working continuously, draining the resources from all other areas of the body, and utilizing these resources without restraints, to produce cells that require even more energy to survive. Cancer is simply over production of abnormal cells without any control on outcome and consequences. The normal cellular elements in a biologic tissue has a certain life span, with control to the number of times it can divide, and molecules which hold them in place and attached to the appropriate cells in the surrounding area. Most normal cells will not continue to divide (with few exceptions like sperms, eggs, etc.) and have very strict criteria to life span, division potential, and function. Cancerous cells lack all of these controls. They do not have the ability to adhere to particular cells, and so may metastasize (move to other areas in the body). They do not posses the normal biological clock that other cells posses, so their life span may be longer. They do not possess the same limitations in function, and may produce products that are harmful to our bodies. These products may be enzymes that can destroy other tissues, or hormones which cause abnormal functions in remote areas of the body.

In the past 20 years the significance of genetics has been introduced and we now know that genetics have a key role in the productions and propagation of cancerous tissue. Many advances have been made in this subject, however, the basic principles of oncology still remain.

Clinically, several symptoms will prompt your physician to think in terms of a malignancy during an office visit. Recent, abnormal, and unexpected weight loss is one such clue. Patients must remember, that there may be many other causes to weight loss and care should be taken in interpreting any sign or symptom. However, when overproduction of cells is present, more energy is utilized in this process, and patients may loose weight. Unexplained pain is another possible symptom but pain is so common with other disease processes that are usually not helpful in the diagnosis. Night sweats may be a sign of malignancy but could also be present with infections, and other disease processes as well. Unexpected fractures in unusual areas with unusual mechanism are also a subtle but important sign. Patients that sustain fractures in their spine after lifting a very light weight may require further investigation. However, patients with severe osteoporosis may sustain such fractures after minimal exertion as well. A physician will make judgment as to the age prior to further investigation. For example, a 90 year old female, who is white in color, very thin, and drinks alcohol is likely to have a compression fracture from osteoporosis. However, a 40 year old male who is athletic and sustains a fracture as a result of lifting a grocery bag should be investigated further.

The investigation of a patient suspected having a spine tumor will usually begin with an x-ray. This is a relatively simple test and is readily available. Even though it is commonly used, its interpretation requires great deal of experience, knowledge, and training. This example is provided so that the reader can understand the complexity of interpretation of such studies. The above x-ray is of a patient with lung cancer which has invaded the spine. Both pictures are the same, however the left x-ray is marked to simplify understanding. The red mark is depicting a structure that is called the Trachea (wind pipe). It carries air from our nose to our lungs and is a vital structure. It can be seen to be shifted to the side. The blue marking depicts the mass in the upper area of the lung that is actually shifting the trachea to the side. There is a white line seen which is calcification within the mass. The the yellow marking is that area of the bony spine that has been destroyed by the tumor.

Blood tests are also important in the investigation. There are numerous markers available to check for different known cancers. For example, a screening test routinely used to check for prostate cancer is PSA. An elevated PSA will prompt many physicians to further investigate the possibility that a patient may have prostate cancer. Likewise cancer of the colon, has a whole different set of laboratory studies. Another indicator is the ESR which is a sign of inflammation anywhere in the body. If elevated, further investigation may be necessary to explain this elevation.

A bone scan can also help in the diagnosis of tumors. Below is an example of such a study. The bone scan will show areas of increased blood flow and can direct the investigation to a specific area in the body. Bone scans are performed in the section of nuclear medicine and are interpreted by physicians specifically trained for this purpose. Bone scans are also used for infections and fractures. The case below revealed further tumor in the hip area which required further protection from possible future fractures which may result from invasion of tumor.

CT scan is a valuable tool available to your physician to evaluate bony architecture, invasion of tumor, and extent of size. In general, CT scan provides better bony detail than an MRI scan. The CT scan can further be reconstructed to show different views of the structures in question. Newer technology allows the production of very detailed images in a relatively short period of time. There is radiation exposure involved with the use of the CT scan but the benefits far outweigh the risk of radiation. The images to the right indicate invasion of the tumor to the spine causing severe weakening of the bony structures. In fact, part of the rib in the back has been eroded by the tumor. To delineate the extent of spinal cord compression other studies, like an MRI can be utilized.

MRI scans can provide further detail in regards to soft tissue anatomy, size of tumor, and extent in the involvement of other surrounding tissues. Neurologic structures can be visualized and assessed if pressure is placed leading to pain, and neurologic deficit. The left sided image delineates the tumor in the bones of the spine at the upper chest. The darker bony areas show up as dark signals and the collapse of the bone can also be seen. The lower levels show up white in color. More detailed images can also reveal the pressure on the spinal cord which can lead to weakness, numbness, or pain. MRI scans are now routinely used with patients suffering from cancer. However, they take longer to perform, and some patients may not be able to tolerate the small space which they must enter to have the scan. MRI is not associated with any known radiation.

Once the diagnosis of cancer has been made, and the extent of involvement assessed, a treatment plan must be designed. Many factors must be considered when making such decisions. In general, there are few types of treatment options. These include, chemo-therapy, radiation therapy, and surgery. The assessment of prognosis is extremely important. Factors that must be assessed include, the type of tumor, severity of local involvement, severity of distant (metastasis) involvement, sensitivity to chemo-therapy, sensitivity to radiation therapy, surgical access, general health of patient (medical conditions such as heart or lung disease), nutritional status, biologic aggressiveness of the tumor cells, and mental status of the patient. For example, a child with a benign, non-aggressive tumor which does not grow but causes only pain which is relieved by Aspirin can be followed up without any further aggressive treatment. On the other hand, a 70 year old male with prostate cancer that has invaded the spine and placing pressure on the spinal cord after causing a fracture in the spine may require radiation therapy, surgical excision, decompression of the neural structures, and fusion with metallic implants. All cases mentioned, efforts should be made to involve all possible family members to arrive at a treatment plan agreeable with the patient and their families. These cases are treated on individual basis and clear cut rules are not available. Many times the experience and values of the physicians, patients, and family members will dictate the decisions regarding treatment plans.

The information provided in this page is a very limited glance at the subject of spinal (and orthopaedic) oncology (the study of cancer). Each case should be assessed individually and different physicians may provide different judgments at the time of evaluations. The subject is very complicated and involved with great deal of known as well as unknown facts. Consult a specialist if you are confronted with such a diagnosis.